SMS Marketing | What marketers can learn from Jack in the Box 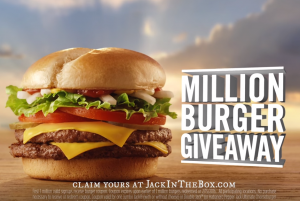 Photo credit: Jack in the Box

Jack in the Box extended a bold offer in their Super Bowl ad “Crossing the Delaware.” Proud of recent upgrades to their menu items, the company dressed their mascot as George Washington to announce a “Declaration of Delicious” giveaway of one million of its new double stacked, $4.79 buttery bun burgers.

If you’ve worked in marketing, this ad campaign might make you ask yourself, “What’s the best strategy for giving away a million hamburgers?”

It is a good question because coordinating such a massive promotion is no small task and the consequences of failure can be high. In 1986, restaurant chain Burger King ran a campaign called “Where’s Herb?” that was deemed a marketing flop. One contestant’s winnings got tied up in a consumer fraud lawsuit. Profits dropped 40% the year the ill-conceived promo ran. It was bad news for all stakeholders. The fast food chain flipped its $200 million ad budget to another firm.

Giving away a million hamburgers is a strain on logistics. For many retailers and restaurants, coupon fraud remains a very real problem and Jack in the Box is one of America’s largest hamburger chains, operating 2,200 restaurants in 21 states. How is it possible to ensure one million burgers are distributed to one million individuals and a small number of people don’t gobble them all up?

Such a giveaway might not even be possible in the old days of redeemable print coupons. But by using a mix of online and offline tools, Jack in the Box is close to pulling it off. To receive a free hamburger, consumers visit jackinthebox.com to sign up and get a digital coupon via text or email with an expiration date. Guests can then show this digital coupon on a mobile device or bring in a printed version to the participating location.

Running a promotion in this fashion is an excellent way for Jack in the Box to build their marketing list through website registrations. Given the choice of displaying a digital coupon on a phone or printing it, which do you think consumers prefer? According to CodeBroker research, the choice is overwhelmingly in favor of mobile devices – approximately 70-80% of the total emailed coupons will be viewed on mobile phones while a smaller 20-30% of the emailed coupons will be printed from the desktop.

Get ready to sell with the world’s first multichannel CRM
Engage with customers in real-time across every channel, no matter the medium. Use visitor tracking and email analytics to know what your customers are seeing.

In terms of redemption, the portion of digital coupons redeemed via mobile will typically be 80%-90% of the total email coupon redemptions (slightly higher than the percent viewed via mobile). Based on our experience, this higher redemption rate for mobile versus desktop (printing) is due to the habit consumers have of always carrying their phones (and therefore the coupon) with them.

On the channel-delivery side, when consumers are given the option of receiving coupons via email or SMS as is the case with Jack’s promo, typically more than 35% will select SMS. This percentage has been growing steadily every year for the past five years.

Room on the Menu for Improvements

Jack in the Box should exploit its mobile app to allow its users to request their coupon offer directly. CodeBroker typically sees high redemption rates from mobile coupons delivered to mobile apps, since consumers who interact with a company’s mobile app tend to be their most loyal.

It also would be wise for Jack to sample single-use mobile coupons at checkout. In Jack’s case, using a generic promo code number for redemptions can potentially leave room for fraud, since issuing generic promo code numbers alone may encourage the public to exploit them repeatedly. Fraud aside, Jack is missing a great opportunity to collect analytics on consumer behavior at every step of the cycle, from time of issuance to time of redemption, from location to expiration. Single-use coupons can enable this type of analytics. Big data is about smart data; intelligence is compiled and analyzed for better demographic segmentation and new campaign re-targeting purposes.

Imagine a time when coupons are intelligent enough to auto-customize themselves to the individual or the entire family. Good metrics can steer the next promo and fine-tune the next discount offer.

There was a time when marketers would lament that “Half of our marketing budget is wasted, I just don’t know which half.” Now that mobile coupons and redemptions tracking have entered Big Data country, success can be measured, allowing for an orderly distribution of one million burgers to a million different people.